Scars have been with me for a long time. Time and again, life has confronted me with scars, enriched the journey with insights and allowed me to have the experiences that have enabled me to uncover blind spots and ultimately led me to bring the Liedler Concept into my life.

How did it all begin? At the age of 18, a part of my gluteal muscle tore off in a riding accident. After that, the dynamics of the entire right leg axis began to change successively. Four years later I had developed severe pain in my right foot. A SCAR TREATMENT BY A FRIENDLY MASSEUR EFFECTED THE UNEXPECTED. After the second or third treatment I got a very intense muscle soreness in my right leg, the right leg axis started to correct itself again and after a few weeks my foot was pain free again. I was unbelievably surprised THAT SCARs, so far away from their actual location could have such effects and that they then REVERT SO QUICKLY despite having been there for several years.

Based on this experience, I directed the FOCUS in my practice STRONGER ON THE THEME OF SCARS, insofar as they appeared in the findings and in the initial consultation. The perception, grasping and TREATMENT of these scars and adhesions always brought about unexpected improvements on various levels, locally and elsewhere in the body, and exciting successes.

My reflections on this were to deepen further. In 2013, I had an unexpected emergency C-section. After the grace period that had been observed and recommended by the doctors, I developed for the FIRST TIME in my life those certain BELLOW, SHARP BACK PAINS, the description of which I knew so well from patients in the practice. I could no longer sleep on my stomach, let alone pull my right leg up in a prone position, as it was causing me pain in my hip and groin. In addition, my BLADDER VOLUME had DRASTICALLY DECREASED. NECK PAIN, SHOULDER TENSION and HEAD PAIN were further side effects. The assumption that these painful conditions were triggered by carrying my newborn or toddler made no sense to me because of the fact that I had already experienced more strenuous physical activities with my body without the occurrence of pain.

I did not want to be satisfied with this explanation.

I did not want to be satisfied with this explanation. Moreover, right where the SCAR OF THE C-section was, I had a FEELING OF TIGHTNESS that felt like knots deep in my abdomen; pulls of tension that were not there before the C-section and that prevented me from standing up and restricted my breathing. I began to treat MY SCAR WITH all the TECHNIQUES I had learned IN MY TRAINING IN PHYSIOTHERAPY AND OSTEOPATHY. The result was not satisfactory. The scar became more beautiful on the surface, but the feeling deep in the abdomen and the discomfort did not improve. In addition, from about a year after the caesarean section, the period pains were now accompanied by burning and stabbing pains throughout the incision of the scar. I began to TRIAL NEW HANDLING TECHNIQUES, using TENSION, PRESSURE and TRACTION in different directions across and along the scar to test WHICH HANDLING, WHICH INTENSITY and WHICH DEPTH of the tissue layers it took to reach where I suspected and felt the cause of my discomfort. THESE CONCRETE, DEEPER GRIPS WERE SOMETIMES VERY PAINFUL. But: lo and behold, the FIRST REAL IMPROVEMENTS AND CHANGES occurred!

As I slowly worked my way over the scar into the depths of the associated fascial and peritoneal adhesions, SUCCESSIVE MY BACK began TO RELAX, the PAIN in the groin, hip and during menstruation, as well as the tension in the shoulder and neck area, subsided and the BEHAVIOUR OF MY BLADDER NORMALISEDagain. Thus all the initially described complaints and symptoms, which from the outside could have had completely different causes, were resolved simply by the continuous treatment of the scar and the deep, fascial and peritoneal adhesions. 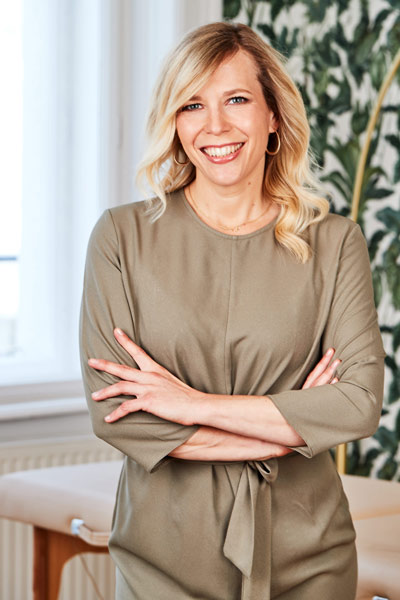 With scars, the most important thing is to use the right grip techniques and to reach the right tissue layer.

My conclusion was that in the case of scars, it was mainly the correct gripping techniques and reaching the correct tissue accompanying layer in the depth of the abdominal cavity that mattered whether the techniques were successful and the scar changed in the long term. Direct techniques via traction combined with the use of shear forces as well as concrete, manual MOBILISATION OF BONDED TISSUE STRUCTURES with the inclusion of the surrounding joints in the treatment process really allowed the body to breathe a sigh of relief.

I now began to APPLY MY OWN EXPERIENCE IN PRACTICE and to extend the techniques. Over time, further VARIATIONS OF THESE TECHNIQUES emerged, which I successively related to accompanying symptoms and adapted accordingly. I noticed that the success I had achieved with myself was also achieved with other patients. That by focusing on the deep sliding layers and peritoneal adhesions and treating them, SIMILAR IMPROVEMENTS CAME VERY QUICKLY TO MY PATIENTS, accompanied by a feeling of relief throughout the body. Even uncomfortable or chronic painful body patterns that had been considered untreatable for years and that patients had resigned themselves to, began to change again.

The LIEDLER CONCEPT was born.

Last but not least, it takes A LOT OF COURAGE ON THE PART OF THE PATIENT but also the therapist to face and understand scars, fascial and peritoneal adhesions. ANTENNAS AND ATTENTION are as indispensable as good cooperation and communication between patient and therapist during the treatment in order to successfully release scars and adhesions with the Liedler Concept and reintegrate them into the body.

The body does not forget. Even if we do not remember. The BODY STORES ALL THE EXPERIENCES WE MAKE. Always as a chance to let both the good and the less good or traumatic become part of the whole again at some point.
PERCEIVE. BE AWARE. ACCEPT. DISSOLVE AND INTEGRATE. ENJOY THE BODY AGAIN.